Habitare 50 years – but where did it all begin?

The story of the 50-year-old Habitare is made of Finnish design, designers, and homes and interiors – and closely intertwined with Avotakka magazine. There is also a piece of Italy embedded in Habitare, as ‘abitare’ is an Italian verb meaning ‘to live in’.

A little nervous? I was about to give a speech at the opening ceremony of the Habitare fair one autumn, and of course, there were many eminent people present. But not to worry. As the editor-in-chief of Avotakka magazine at the time, I was familiar with the history of the magazine, founded in 1967, and I could draw on that to inject some suitable self-praise into my speech.

As it happens, Habitare is based on an idea by Avotakka’s editorial staff and, apparently, its first editor-in-chief, Sauli Sipilä. The progressive, and initially even elitist, interior design magazine had spread the message of cosy living, and also brought news from international fairs around Europe. We had no such event in Finland. It was time to create one! 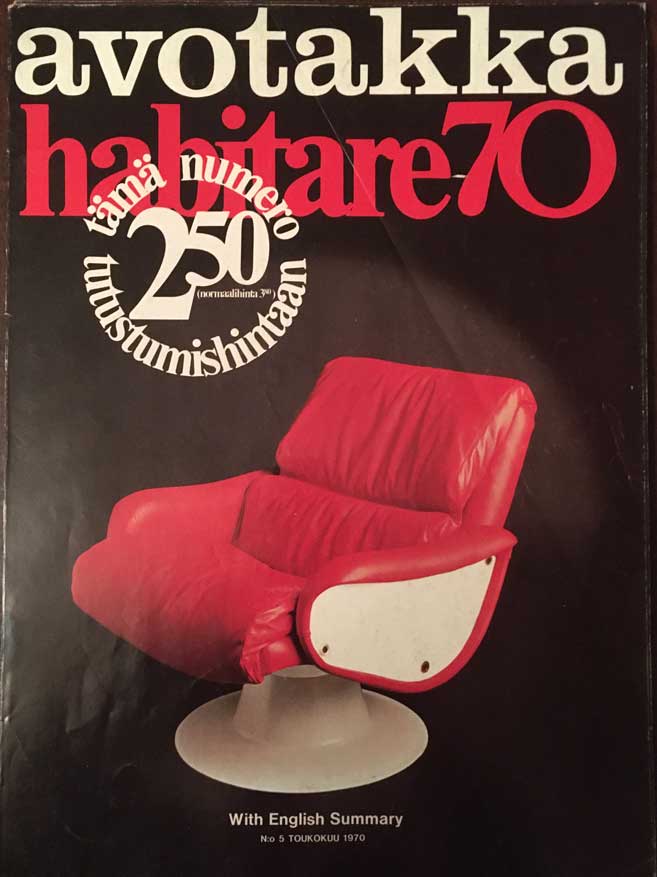 A carefree future ahead

The debut of Habitare, which is celebrating its 50th anniversary this year, took place in the Exhibition Hall on Mannerheimintie in Helsinki in the spring of 1970 – from 17 to 26 April 1970, to be precise.
The event and its themes were advertised using the English terms leisure, cosy dwelling, and future. The wide-ranging special exhibition was said to encompass everything related to the most important aspects of each person’s private life: home, living, hobbies and leisure time.

“The rise in the standard of living and the increase in leisure time are nowadays often mentioned as linked concepts, as undeniable facts. But how they affect our lives and how we use them to our advantage are questions to which each person seeks answers in their lives. Habitare 70 aims to contribute to helping people find answers. The product groups and themes featured at the event are closely related to everyone’s life. These include housing; interior decoration; home automation; the kitchen with appliances; outdoor spaces; the connection of the home with society (health, insurance, parenting and childcare); construction and building design; leisure activities; fashion; and home accessories. And Habitare 70 is not just an exhibition, but it also guides and gives advice to both the general public and the individual enquirer.”

This high-sounding programme was conceived by the exhibition committee of the new fair, which included Avotakka magazine, the National Housing Board, the Finnish Association of Architects, Ornamo Art and Design Finland, and the Finnish Fair Corporation, which was responsible for the practical arrangements.

From today’s perspective, the scope of categories is a bit amusing: the exhibition covered furnishings and surface materials, but also items such as disposable tableware, recreational fitness equipment and toys, and caravans, as well as nature conservation and game management, including hunting and fishing.

Everything was, of course, done in style. For example, the Avotakka stand was designed by the interior architect Yrjö Kukkapuro, and visitors to the stand were served by the magazine’s knowledgeable team of editors and assistants, including a young journalist dressed in highly fashionable, white leather dungarees. With coy pride, it was stated that “in addition to providing guidance, the magazine will be published audiovisually at the Habitare exhibition by use of the magazine’s own television programme and slideshows displayed on the monitors”.

From Avotakka’s Habitare 70 special issue, I would like to mention the stories Going pedestrian, a human privilege and Can we save our living environment? Pretty surprising and progressive for features published 50 years ago, right? Built into a studio in the A-lehdet media company’s brand-new office building were nurseries designed by Vuokko Laakso, Simo Heikkilä and Maire Revell, and a colourful model of a 50-square-metre flat, with various living zone components, which, according to the story, could be accessed directly from the street by lift, and perhaps later by a compressed-air mechanism, which would pull the resident into their apartment. The environment was controlled by an in-home television system, and the interior elements were expected to be manufactured using vacuum technology. A wonderful utopia, expected to be realised in 1979.

The May special issue had an English summary of the content, but by the turn of the year, this went a step further: the Finnmilieu 70 was published in five languages – as international as anything. 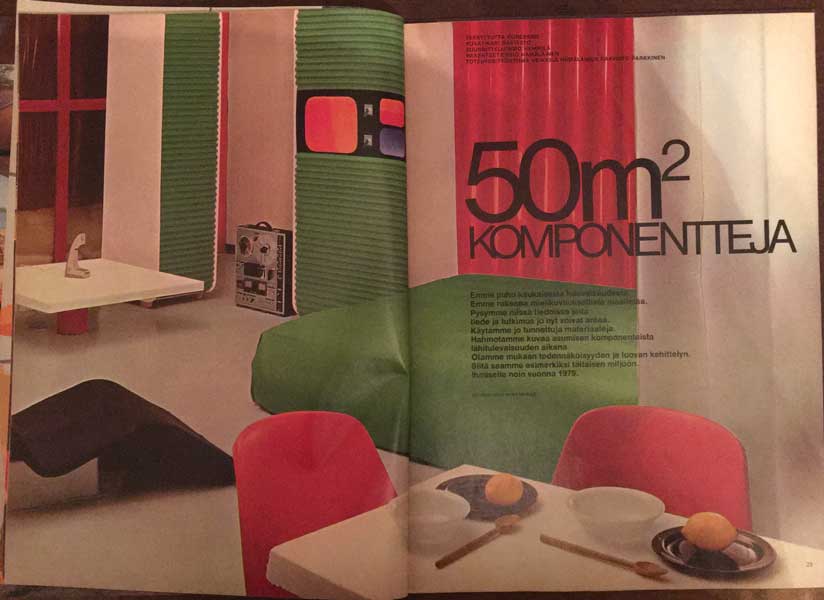 The first Habitare fair had more than 130 stands and exhibitors; the cream of the industry. The fair featured, among others, AEG home appliances, Damixa taps, Sinipiika mops, Tikkurila paints, and Helo sauna heaters, as well as some companies that are still going strong today, including Artek, Marimekko, Orient-Occident and Skanno.

Even today, interior decoration companies want to showcase their expertise and products at Habitare, or at their own premises or in joint exhibitions, while the fair is on. The general public and professionals are grateful: you can see so much and such variety in one go. If, in the financially lean years, we have seen all manner of copies of copies of the best-selling sofas, then during an upturn, exhibitors have had the courage to let loose and challenge viewers to seek something new.

Habitare’s Signals trend exhibition has always brought together the views of trend analysts on the phenomena, materials, shapes and colours that best represent the upcoming trends, that is, what is happening in interior design around the world. Today, the event also does a great job of addressing the issues of recycling and the use of production waste materials.

At the end of the speech mentioned above, in 2001, as I recall, I presented Avotakka magazine’s traditional Habitare award to Ilkka Suppanen, who will be creating the Habitare exhibition design in the anniversary year 2020. The magazine gave out its first award as early as 1981, and, exceptionally, to two people, Simo Heikkilä and Yrjö Viherheimo. For a long time, the fair was held every two years, so the award has also been presented in alternating years. The award-winners include Hannele Bonsdorff, Stefan Lindfors, Tuula Falk, Pasi Pänkäläinen, Petri Vainio, Samuli Naamanka and Jukka Korpihete.

The magazine’s award has been used to highlight and encourage young designers who have in some way demonstrated their abilities but are still fairly unknown to most people. In retrospect, it can be said that we did a great job of predicting future greats and interior design trendsetters.

The keyword is, of course, design. Good design brings comfort, beauty and functionality to the home and workspaces.
Although Habitare is a sales promotion event, it offers manufacturers and importers the opportunity to put on an impressive showing – make it big and make the stands more and more beautiful. I have always been delighted with the ideas and outputs that emerge from the design competitions for students, the exhibitions of educational institutions, and Protoshop, which annually introduces 10 to 12 new product ideas. With good luck and the right contacts, a designer can get their as-yet-unfinished product idea into production and sales. The publicity can lead to new partnerships.

In the autumn of 2009, the exhibition organisation and the Design Museum presented the Habitare Collection, an exhibition of the 31 most interesting design products of the 21st century. The exhibits were transferred to the museum’s holdings, and the collection is gradually being expanded.

For many years, Avotakka published a special issue that included a list of exhibitors at the Habitare Fair. In the stories, the editors presented new products from the exhibitors and showed how selected furniture, textiles, small objects, and surface materials fit into Finnish homes, and alongside well-known classic designs. The preparations were extensive, as we contacted dozens of companies, enquiring about their upcoming products to be exhibited at the fair, in the hope that something would be ready or in prototype form at this point, way before the September fair. We used to shoot interiors at the studio in July, and a special issue came out before the fair. Aftercare and replenishment included finds from the fair and a happy party with our partners – cheers and thanks!

A piece of Italy

In the history of the A-lehdet media company, Juha Numminen writes that Avotakka’s emergence was influenced by the strong upturn in the economy in the mid-1960s, the rise of prosperity, and a lifestyle centred around the nuclear family, following urbanisation. Home and living became increasingly important. The same issues contributed to the emergence of the Habitare fair.

Avotakka’s snazzy monthly publication is modelled on the Italian Abitare magazine, and as you might guess, this is also where the fair’s Latin-based name comes from. Abitare is an Italian verb meaning to live in. The exhibition programme of the Finnish Fair Corporation has included, for example, a boat exhibition, a food fair, and an office technology exhibition without any fancy names, so Habitare, as a name, stands out as something grander and more international.

Representatives of Avotakka’s first editorial board remember how frequently the magazine staff visited fairs abroad, especially in Stockholm, Copenhagen, Frankfurt and Milan. Foreign influences were important. Cause or effect: the editor Arja Luukela, who worked for Avotakka in the early years, later found herself in Italy and became the editor-in-chief of the major Interni magazine for many years. She has always, in many ways, promoted Finnish design around the world. 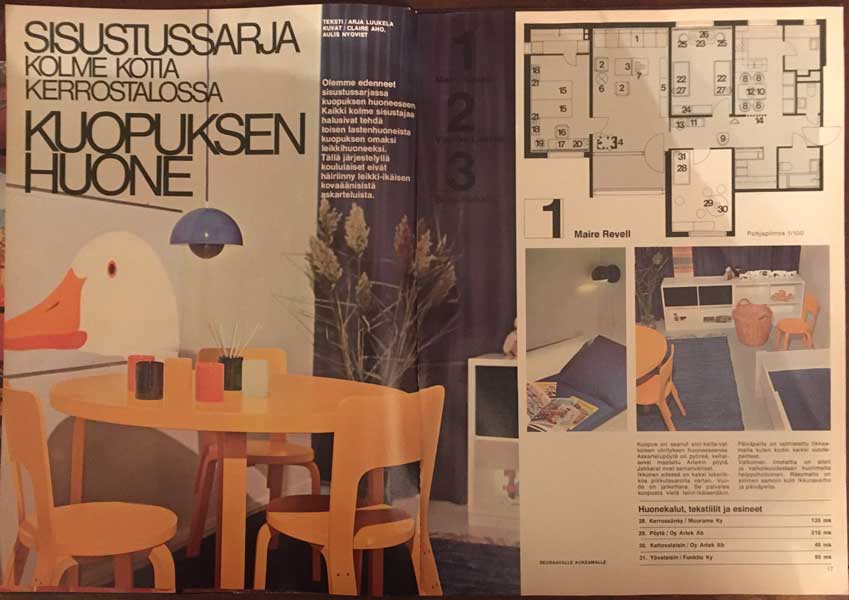 The first Habitare advertisement says that the exhibition is full of tips on how to counterbalance a busy working life.

“It’s an exhibition of happy homes and happy living – go and get some new colour for your life.”

Soili Ukkola, a journalist and the former editor-in-chief of Avotakka, Finland’s largest interior design magazine, has spent the best decades of her career working on interior design for the home.